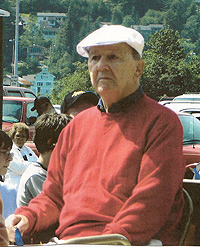 Bill grew up and attended schools in Waynoka. As the son of a railroad man, Bill and his friends managed to take many trips around the surrounding countryside. This helped develop his interest in travel and adventure. He was a great baseball fan. His hero was Mel Ott who entered the major league when he was only 16.

In November 1942, six weeks into his Junior year, Bill and several friends dropped out of school and attempted to enlist. Bill’s friends failed the physical, but Bill barely made the weight limit and joined the Navy.

After Boot Camp he was assigned to the USS PORTLAND, a heavy cruiser, whose first mission after he boarded was the Aleutian Islands campaign. From there it was to the South Pacific for a number of major battles.

At the end of the war his ship was chosen to take the Japanese surrender of the Central Pacific Islands at Truk. His ship was then designated to transport troops returning from Europe to New York. The visits to New York enabled him to attend clubs at which jazz greats, such as Slam Stewart, played. These visits developed in him a lifelong appreciation of good jazz music.

After his discharge from the Navy in 1946 he returned to Waynoka. His time in the Navy had convinced him an education was a must. He attained a GED and enrolled at Northwestern Oklahoma State University in Alva, Oklahoma. 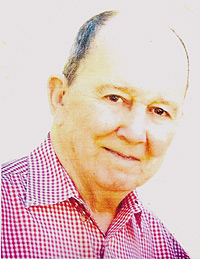 On May 25, 1947, Bill and Jean Perry were united in marriage in Waynoka, OK. They were blessed with one son. The family stayed in Waynoka until Bill graduated from Northwestern Oklahoma State University in 1951. His first teaching assignment was a History teacher in Huerfano County High School in Walsenburg, CO.

In June 1952, at the urging of his sister and cousin, the family moved to Juneau where Bill hoped to secure a teaching position. While waiting to be interviewed for a job he worked on the construction of the Harborview School and was a Stream Guard in Haines.

He began his teaching career in Juneau in September 1952 as an 8th grade teacher at Capital School. He spent his summers commercial fishing until it was necessary for him to return to college for additional education. He received his Master’s Degree from the University of Washington. His education career advanced when he became Principle of Capital School. From there he moved to the Alaska Department of Education as an Elementary Education Supervisor.

He returned to the Juneau School District as Capital School Principle and in 1964 was promoted to Superintendent of the Schools. During his years as Superintendent he spent a Sabbatical Leave studying the Community School program at Wayne State University, Detroit, MI. He returned and started the Community Education Program, which is operating.

In 1962, he won the Golden North Salmon Derby with the smallest fish that had won at that time. He took a lot of kidding about his small fish to which he replied, “I caught just the size of fish I needed to win.”

After retiring from Education he was elected to the Assembly of the City and Borough of Juneau. The fear of losing the capital prompted him to run for Mayor. As a consequence of his travels connected with his work in education, he was acquainted with many people around the state. He was elected for three terms.

During the Capital Move Campaign he traveled the entire state from Ketchikan to Barrow and spoke of the importance to that community of keeping the Capitol in Juneau. On three occasions he debated Bob Atwood about the folly of spending funds for a new city when there were so many basic needs facing existing Alaskan communities such as roads, schools, water and sewer.

Bill took the lead in modernizing Juneau. The rehabilitation of South Franklin Street where the cruise ships dock took place on his watch. Specifically, he caused utilities to be buried and broad new sidewalks to be installed.

He was also very proud of his effort to fly the flags of the 50 states on Egan Drive. This was an idea that came out of a visit he made to Switzerland. He was very appreciative of the group of volunteer citizens who put up and took then down during the visitors’ season.

While Mayor he served as President of the Alaska Congress of Mayors for two terms. He received the Juneau Chamber of Commerce Citizen of the Year Award in 1982 and an Honorary Doctorate from the University of Alaska Southeast in 1985. He was deeply humbled and extremely honored to have been identified by the Juneau Empire as on of the twenty-five people “who had the greatest impact” on Juneau in the history of the town.

After leaving City government he was appointed Trade Representative for the State of Alaska for the Pacific Rim. Stationed in Tokyo, Japan, he promoted trade with Alaska throughout Southeast Asia.

Returning to Alaska he worked to help elect Walter J. Hickel as Governor. Bill figured that since Governor Hickel had helped to save Juneau as the capital, he would help Hickel be elected to his second term. He finished his working career as Deputy Chief of Staff for Governor Hickel.

The last few years spent on the Wale Project. He felt this Bronze breeching Humpback Whale from an Infinity Pool, a sculpture by Skip Wallen, Placed on the waterfront, would be a landmark for Juneau, as the Space Needle is for Seattle.

Burial will be in Evergreen Cemetery. A Memorial Service will be held in Centennial Hall Convention Center July 8th at 3PM. In lieu of flowers the family requests donation be made to the Whale Project.