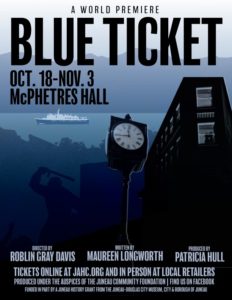 This project began with whispers in a lunch cafe when I first arrived in Juneau in 1992. Welcoming women from the LGBTQ community explained that gay and bisexual men were still underrepresented in Juneau ever since they were secretly sent away in the sixties.

Having relocated from the San Francisco Bay Area where gay pride was publicly celebrated, I began my quest to uncover Juneau’s LGBTQ roots. I gradually interviewed over fifty people who were here in the 60’s, who each had their own angle on this historic period.

As the story grew and the perspectives varied it became clear that the best way to weave the unraveling past was in a historical fiction. Characters took life at a University of Iowa intensive playwriting course and the plot easily unfolded as a mystery romance set in Juneau in 1963.  As my script writing skills developed at a Hedgebrook masters level residential intensive, and through UAS classes, and Perseverance Theatre workshops; I also worked directly with
other playwrights and dramaturges. I have many experts to thank!

I’ve written scripts all my life, maybe because I grew up in San Fernando Valley under the sparkle of the Hollywood sign.  Even on entering medical school, aghast by the blatant sexism at the University of California San Francisco in the early 80’s, my reaction was to document incidents in dramatizations.  Humorous skits became a twenty-minute show that succeeded in getting the attention of our dean; and grew to reach and change the city, the state, the nation and the world. “Turning Around Sexism in Medicine” was discovered by local and national medical, legal and business societies, universities and corporations who demanded its conversion to film.  Following debut on local San Francisco public television and the famous old Roxie Theatre rave reviews from Vogue Magazine, the Los Angeles Times, the San Francisco Chronicle and others propelled it around the world. Video copies were made in answer to the need for international distribution. 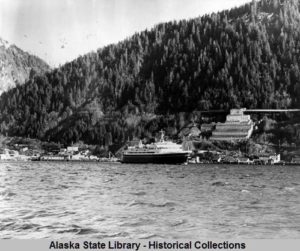 The story of the Blue Tickets as they were called, causing suspected gay men to disappear one by one from our Juneau landscape in the sixties lends itself to a similar exposure opportunity.  Our social-political inequality is built on these unmentioned cornerstones of history. The completed work, I titled “BLUE TICKET – Ferries/Fairies Out of Alaska” was selected for readings at the Last Frontier Theater Festival in Valdez, Perseverance Theatre, RKP productions at Cyrano’s in Anchorage, the UAS Power and Privilege Symposium, and the Alaska State Library Archives Museum. Being awarded semifinalist in the 2018 San Francisco Bay Area Playwriting Festival validated my writing and empowered the importance of getting the show to the stage.

Patricia Hull an experienced producer, actor and singer offered to produce our Juneau premier that will be staged at McPhetres Hall, and directed by Roblin Gray Davis in late October through early November 2019.

We appreciate the support we receive with the Juneau Community Foundation, the Juneau Arts and Humanities Council and individuals and businesses that donate to our project. We are especially grateful for a history grant from the Juneau Douglas Museum that seeded the reality of moving forward with this project early on, and supports us filming our production for future use beyond our Juneau stage.

We invite you to be part of the dream for this theatre project to contribute to equality in a world that cries out for it.