About Us
Board of Directors
Staff
History
News
Finance and Investment

The Juneau Housing First Project will create 32 permanent supportive housing units that target Juneau’s highly vulnerable chronic homeless population who are chemically dependent and exhibit an extensive history of emergency service utilization. Many of these individuals have co-occurring disorders, such as substance abuse and mental health disorders.

The project will provide safe and secure housing to residents in order to facilitate dignified lives, a healthy community, and will provide significant cost savings to the community. This $7.3 million project has been under construction since last spring and expects to open its doors in June 2017. The Juneau Community Foundation is working with the Collaborative to raise the last $200,000. The Juneau Housing First Collaborative is a powerful example of a community effectively pulling together to address a critical social issue.

Housing for the homeless in Juneau, click here to learn more about this project and how to donate. 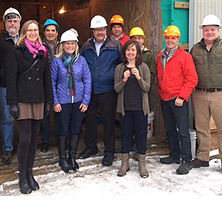 The Juneau Community Foundation thanks the Juneau/Lynn Canal Cabaret, Hotel, Restaurant and Retailers Association (CHARR) for a recent donation of $20,000. Half of the funds were donated to the Foundation’s recently established Juneau Hospice Fund and the other half directly supports the Foundation’s year-round efforts to raise philanthropic support for important programs, services and special projects throughout the community. Learn more 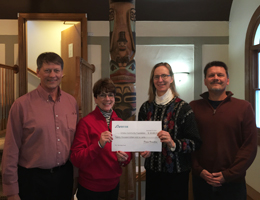 The Juneau Community Foundation held their annual philanthropy recognition dinner on October 4, 2016. Every year the event honors a person and business that has been instrumental in supporting our community through their philanthropy. Honorees this year:

James Wilcox, Sr. received the Philanthropist of the Year Award

My Turn:How to become a philanthropist
By Sioux Douglas
Juneau Empire, January 21, 2013

My Turn: Giving back
By Eric Kueffner
Juneau Empire, November 8, 2012

Looking toward the future
By George Elgee
Juneau Empire, April 15, 2012

Philanthropy – support what matters most to you
By Reed Stoops
Juneau Empire, December 21, 2011

Juneau Community Foundation in the News

My Turn: How to become a philanthropist
Juneau Empire, January 21, 2013

Education as part of that ounce of prevention
Juneau Empire, February 26, 2012

Philanthropy – support what matters most to you
Juneau Empire, December 21, 2011

Philanthropists Honored By Community Foundation for “Giving Back” to Juneau
March 19, 2009 (PDF 201 KB)

Thank you from the Juneau Community Foundation
Thank you to 2012 donors and sincere gratitude to the individuals who honored its Philanthropist of the Year, Bill Corbus