Mr. Seward takes his hat off to the people of Alaska as he offers them the deed to the land that has been said by some to be the Earth’s last gift to mankind. He offers his humility, yet is proud of what we Alaskans would consider perhaps his greatest act, an act of great vision.

He stands atop a block of marble from the quarries of Marble Island, an island off the west coast of Prince of Wales Island in Southeast Alaska. This is the very marble that formed the original façade (now hidden) and the columns that stand at the entrance to our own State Building.

Scene of the Courtyard

Seward left his cape in Juneau and it is now part of the State Museum’s permanent collection. If for that reason alone the committee would like to see him wearing it we’ve included a sketch showing how it might look. We could consult the actual item for details.

Rendering of the Face

By 1867, the year of the signing, Seward had already suffered being thrown from his carriage,  fracturing his arm and jaw. Nine days later he was attached by a knife-wielding assailant, a co-conspirator of John Wilkes Booth, who, on the night of Lincoln’s assassination, broke into his house and tried to assassinate him, as well.

These traumas left him somewhat disfigured. As we are sure he would not wish to be portrayed this way, we have chosen instead his more youthful features. He appears as he might have in his mid-50’s (he was 66 at the signing). Mr. Seward had a noble countenance and we will endeavor to portray him that way.

Coming up the hill, there is a natural visual progression: First we see the bear and its salmon representing all that is wild here, next is Seward offering the deed to the state, and finally the establishment of the State embodied by the State Building beyond.

The marble quarry on Marble Island is no longer in operation. The Vermont Marble Company, the original owners, furnished marble used throughout the Northwest: The Montana State capitol building, the Mormon Tabernacle, and the list goes on of prominent buildings that all used this beautiful marble.

The company is now defunct and the quarry long since abandoned. How then can we promise this marble which was once compared to the marble of Carrara, Italy, the source of marble for all of Michelangelo’s work? Luck and the good fortune of knowing, for all the thirty-one years I’ve lived in Alaska, my friends Kelly & Pam Roth. They are PK Builders and they own a portion of Marble Island. There is no longer a working quarry, but there are 18,000 lb blocks of some of the most beautiful marble in the world, still sitting on the beach where they were left by the Vermont Marble Company; the very same beach where Kelly and Pam are now building a house. They have assured me that I will be able to acquire the size that we’ll need.

And, as luck would have it, another very good friend that I have known for as long, Gary McWilliams, is the owner of the Stone Works of Alaska. He has a shop in Craig, Alaska, and one in Bellingham, Washington, where he can cut and etch whatever I bring him. Everything is in place.

These renderings were done in graphite, white pencil, pen and watercolor on Crescent series 110.6, cold press 100% cotton rag, acid free, archival illustration board. It is guaranteed by the company for 100 years. 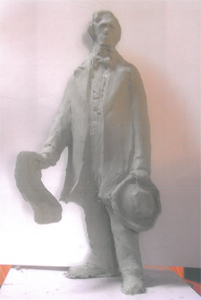 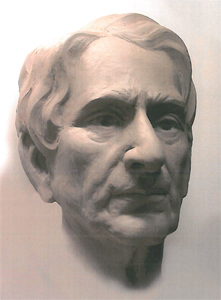