Violinist Linda Rosenthal and Actor Bill Blush will be returning to Y-K Delta to perform and teach in the communities of Tununak and Nightmute, both located on Nelson Island about 100 miles west of Bethel and part of Lower Kuskokwim School District. They were scheduled to perform there last March as part of their 3-week Strings & Stories Alaska Tour, but the weather had other plans. 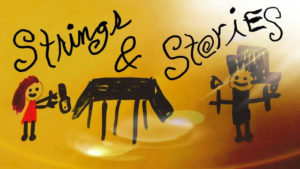 We’ll be working with kids grades K-12 during the school day, teaching them the elements of acting, storytelling and music and how they can combine these three art forms into a creative work of their own.

In the evenings, the entire community will be invited to see us perform Strings & Stories and enjoy seeing several of the local kids up on stage with us, helping us tell our stories and sharing what they learned during the day.

Strings & Stories is a two-person show for young audiences that blends classic stories with classical music in a program that is educational, fast-paced, entertaining and interactive. Children are exposed to a variety of art forms–theater, literature, storytelling, music, mime, improvisation and comedy. They can also volunteer to play an active role in the stories or watch their classmates perform. The show consists of 3 classic tales: Ferdinand the Bull, The Town Where Sleeping Was Not Allowed and The Emperor’s New Clothes, plus favorite poems and limericks, all set to music. 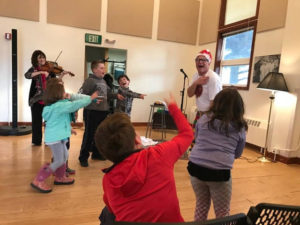 Linda Rosenthal, violinist, and Bill Blush, actor/storyteller, will share their unique and enchanting blend of music and storytelling in an all-Alaskan tour this March. Strings & Stories has entertained thousands of children throughout the Lower 48.

This two-person show combines music and theater in a delightful kaleidoscope of favorite children’s stories, classical music, whimsical mime, and improvisation. It is fast-paced, interactive, educational and fun for audiences of every age.

The idea for an Alaska-wide tour came after a successful performance at the Arctic Tern Festival in Yakutat last year. Rosenthal, who has lived in Juneau for the past thirty years, explained that “We enjoyed performing Strings & Stories in Yakutat so much that we decided that we wanted to share it with more Alaskans, especially those in smaller communities who have little or no access to live professional shows that are geared specifically toward youth and families.” Rosenthal and Blush are hoping to make the Alaska tour an annual event.

In addition to community performances, workshops for children will be held during school hours in the following communities: Quinhagak, Eek, Nightmute, and Tununak. Rosenthal and Blush teach the students the fundamentals of improvisation, theater and music as they apply to the art of storytelling.

Rosenthal created and premiered Strings & Stories for the Kennedy Center in Washington, D.C. in 1995. Designed for grades K-5, the program features familiar tales such as The Emperor’s

New Clothes and The Story of Ferdinand. Family programs include classic tales plus familiar children’s poems and limericks set to music.

Violinist Linda Rosenthal has performed throughout North America, Europe and Asia in recitals, as a soloist with orchestra and as a chamber musician. Based in Juneau Alaska, Rosenthal has also performed in virtually every corner our great State, from fishing villages and logging camps in Southeast Alaska to remote villages above the Arctic Circle. Rosenthal is the Founder and was for thirty years the Artistic Director of Juneau Jazz & Classics, an annual music festival that brings world-renowned jazz and classical artists to Juneau each May.